Thailand’s Quest to Lead the Region in Renewable Energy

By accelerating its push toward renewable energy, Thailand aims to become a leader in sustainability across Southeast Asia. Here we examine the country’s energy market and prospects for investors.

Thailand’s Quest to Lead the Region in Renewable Energy 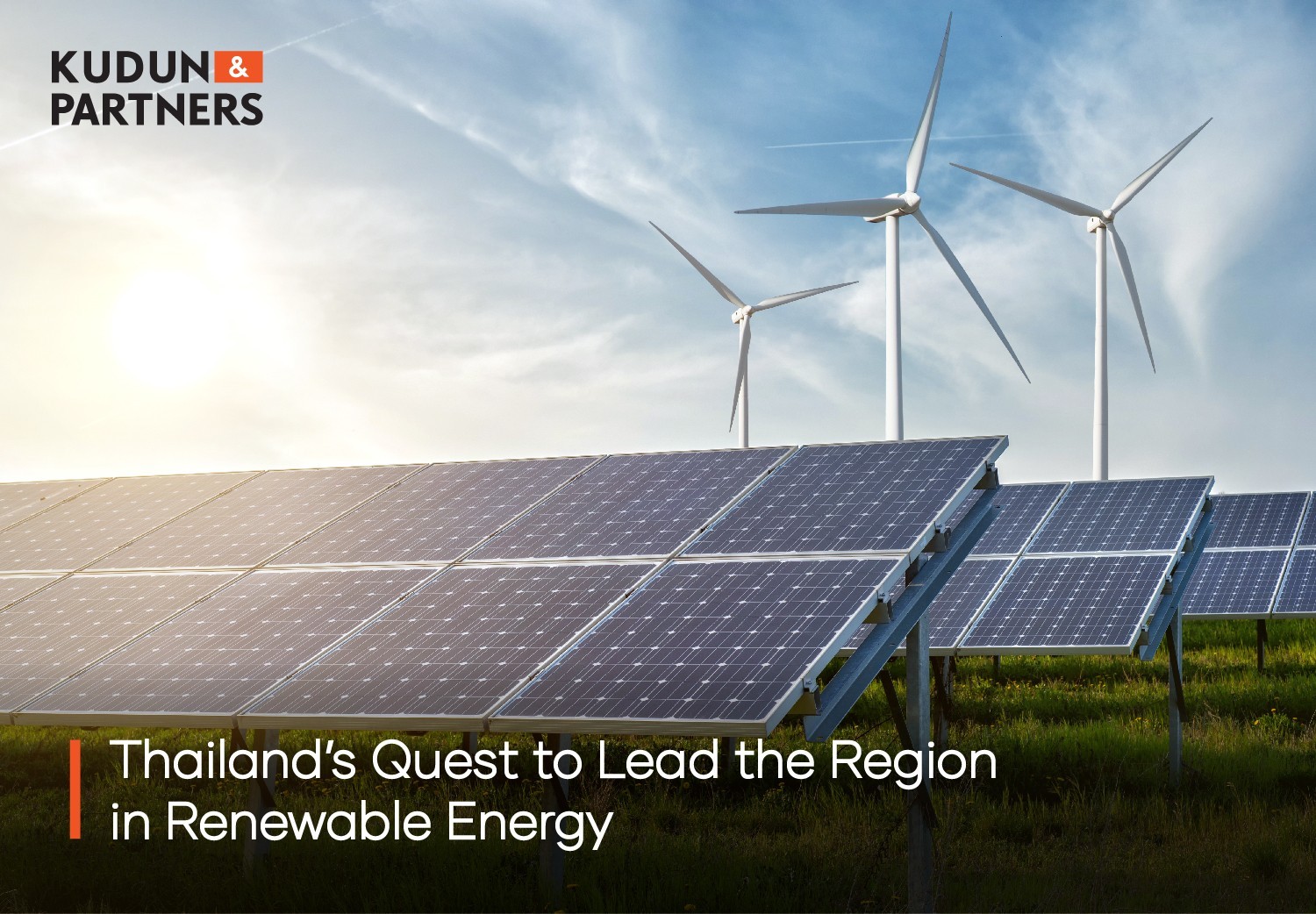 An increasing commitment to renewable energy has Thailand on course to become a sustainability success story within Southeast Asia – but it wasn’t always this way. As recently as 2010, 90% of Thailand’s electricity supply came from coal and natural gas. By contrast, just 2% came from renewable sources.

Thailand’s subsequent decision to invest in renewable energy has led to dramatic improvements in its environmental impact, to the point where one-third of the country’s energy capacity now comes from renewable sources. As Thailand’s expected electricity needs increase over the coming years, so too will its renewable energy supply.

The story of how Thailand came to embrace green energy, and how the country plans to extend its commitment to sustainable electricity generation, has important implications for investors in this sector.

Bringing convenience and sustainability into alignment

Starting in 2007, the Thai government introduced a series of initiatives aimed at increasing renewable energy production. Incentives were handled by the Electricity Generating Authority of Thailand (EGAT), which is committed to purchasing renewable energy from small producers within the country.

Access to a guaranteed buyer proved to be critical for these businesses, because such preferential treatment attracted investors – which in turn enabled further growth over time. Economies of scale, combined with a variety of new technological improvements, had the effect of reducing energy production costs in areas such as wind and solar.

By 2014, there were other reasons to move toward renewable energy in Thailand. Natural gas production began decreasing that year due to waning supplies, forcing Thailand to re-think a large swathe of its energy mix. The country could make up for the shortfall either by importing substitutes or by increasing its investment in domestically produced renewables. 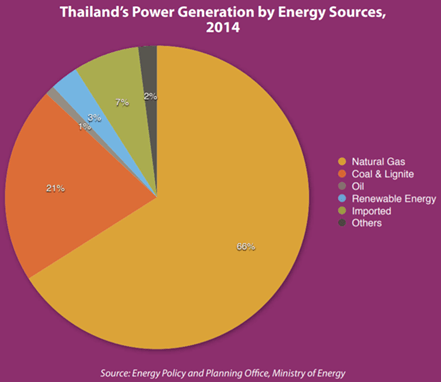 Shortly thereafter a growing cultural awareness surrounding the need for sustainability, together with justified complaints about deteriorating air quality in cities, helped turn the tide even further toward nurturing the country’s nascent renewable energy industry, which had to that point only made up 3% of the total energy mix.

This confluence of trends helped solidify Thailand’s interest in sustainable solutions – but an additional factor was needed to put the country on a serious renewable trajectory.

The document then outlined the path forward that Thailand would soon embark upon, in an effort that continues today and will be further expanded in the years to come:

The main focus of the plan is on solar and bio-energy because of the suitability and ease of production for these energy sources in Thailand. The country’s tropical location makes it an ideal place for the development of solar energy, as the country receives a large amount of solar radiation throughout the year. As for bio-energy, Thailand’s economy is heavily based on agriculture, leading to the production of large amounts of agricultural and municipal waste that could be converted into usable energy.

Combined approaches to electricity generation have also proven to be successful. Kudun and Partners represented B. Grimm Power Public Company Limited and Energy China Engineering Group Shanxi Electric Power Engineering Co., Ltd. Consortium in their ongoing development of the world’s largest hydro- floating solar hybrid power project with the capacity of 45 MW located at Sirindhorn Dam and created with cooperation from the EGAT, the project is worth over THB 842 million (approximately USD 27 million).

Following years of development along these lines, Thailand’s renewable energy capacity now totals roughly one-third of the country’s overall power mix. Thanks to Thailand’s advantageous geographical attributes, these renewable sources are spread out across a diverse range of energy production methods, letting the country avoid over-reliance on a single primary resource type.

This diversity provides an important measure of protection from seasonal fluctuations and other challenges, helping to ensure a dependable stream of renewable energy for a country (and region) that continues to see increased industrialization and economic growth. The new infrastructure of renewable energy in Thailand promises to strengthen the nation’s regional economic competitiveness, as well as its leadership regarding environmental sustainability.

The time is now

Thailand’s move toward sustainable energy independence comes at a crucial time. Electricity demand in the Asia-Pacific region is increasing at twice the global rate, putting it on track to double by 2040. Mindful of the increasing demand for power, yet determined to lower greenhouse gas emissions by 20.8% by 2030, the Thai government has expanded its system of incentives for green energy producers. Tax breaks, feed-in tariffs, easier access to financing, bidding programs, metering schemes, the Blockchain-based peer-to-peer trading of electricity generated by solar energy, and a biomass-centered community-centered power generation program called Energy for All are among the government initiatives aimed at boosting green energy production and use. Currently, Thailand has installed renewable energy capacity of more than 15 GW, and it is forecast to rise to over 60 GW by 2037.

Overall, however, renewable energy production remains a growing sector that will remain very much in demand moving forward. From biomass feedstock and battery technology, to digital systems that enable energy trading, and other elements of an advanced green energy economy, business opportunities in this industry remain plentiful nationwide.

The Thai government has also realized the impacts of disruptive technology such as the energy storage system in the energy sector. As a consequence, to build a smart city, EGAT, together with PEA, plans to develop and replace conventional electricity meters by a smart grid for the Eastern Economic Corridor (EEC). Developing a smart grid system in the EEC can decrease power fees and integrate renewable energy systems. A pilot project has been underway since last year in Chonburi Province.

Moreover, as companies in other sectors continue to incorporate sustainability into their brand values, demand has increased for rooftop solar panels and other types of green initiatives. Businesses that can serve this market, in addition to the private consumer market for similar small-scale services, may find a large customer base for their activities.

Success in these fields, however, is no guarantee. Thailand’s incentive programs and regulatory systems are highly nuanced, making on-the-ground knowhow essential for businesses and investors looking to take full advantage of existing opportunities.

Kudun & Partners can provide expert insight and guidance for those looking to invest in renewables in Thailand, helping to secure advantageous conditions for every project. Contact us today to learn how our legal team can facilitate effective business activity in renewable energy and related fields.

Kudun and Partners has a broad range of experience in all aspects of the energy industry including solar farms, solar rooftops, wind farms, Waste-to-energy (WtE) and natural gas powerplants. We leverage our unparalleled business and legal prowess assisting clients from inception to completion of a project, throughout the project’s operational lifecycle. Our services include providing advice on FDI regulations, incentives by the BOI, company incorporation, corporate structure, tax structuring, acquisition and joint venture agreements, bid preparation, contract negotiation, and project financing.

Our recent work includes representing B. Grimm Power and Energy China Consortium, successfully helping them win the bid to develop the first phase of the world’s largest hydro- floating solar hybrid power project at Sirindhorn dam by the Electricity Authority of Thailand (EGAT) worth over THB 842 million (approximately USD 27 million).